Back
Facts of sea turtles 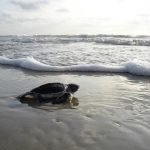 If you ever meet a sea turtle, you have to understand you are in the company of greatness. Don’t be fooled by imagining it flipped on its back, helpless. Each and every adult sea turtle out there is a superhero. It is literally one in a thousand. Life is so harsh for hatchlings that the other 999 did not make it. That’s right, only one in a thousand sea turtle hatchlings survive to adulthood.

Female turtles leave the sea and come up to the beach where they hatched to lay their eggs. During the nesting season, they lay two to six clutches of eggs. Each clutch contains up to 180 round, white eggs. The temperature influences the sex of the hatchlings. The warmer the nest, the more females, while eggs in cooler nests are more likely to become male. After a couple of months in the sand, the eggs begin to hatch. Tiny turtle hatchlings make their way to the sea, facing an overwhelming range of dangers including predators, curious humans and pollution. 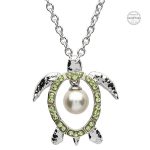 Those that survive are tough, and they have a life of adventure ahead of them. Sea turtles travel massive distances in the ocean. They might lay their eggs in their own birthplace, but that does not mean they are homebodies. These magnificent creatures can travel 10,000 miles a year, roaming the sea. Loggerhead sea turtles have been known to travel from waters off Japan to California’s beaches.

Individual sea turtles live up to 100 years  – if they can avoid predators and other dangers such as pollution. Their faces look ancient, perhaps because sea turtles as a species are ancient. Turtles have been around since the time of the dinosaurs. Yet today they are at risk of extinction. Sharks are their main predator, but it is not sharks putting these amazing creatures at risk. It’s humans. Poachers and pollution are what is killing them. Humans are destroying their habitats, and fishing nets also kill turtles. 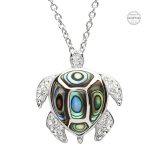 Sea turtles are on the ropes now. They are down but not out. This is the time to learn what we have to lose if these creatures become extinct. Seven types of sea turtles exist, and six are considered at risk.

Each individual sea turtle is tough as nails. As a species, they have survived more than 100 million years. Today, they are vulnerable due to human activity, but it is not too late to turn it around for turtles and show these majestic creatures some respect. They have been here longer than us, after all!

Sea turtle jewelry would be the ideal gift for any turtle admirer!